"SEWA - A national organization of self employed, unorganized sector women"

SEWA Kerala was born in 1983 and has its base in Trivandrum. It is a federation of various organizations which are member based. The members are poor women workers from the informal sector. Its committee is made up of elected members representing the various organizations and some professionals who are at their service.

The present President is Asha Francis, a domestic worker.

Self Employed Women’s Association (SEWA) is a national organization of poor women workers in the unorganized sector. The main focus of SEWA has been the betterment of women’s livelihoods, attainment of rights and recognition of their work and as workers, income and social security through their own collective strength.


SEWA was born in Gujarat in 1972 under the leadership of Smt. Ela Bhatt whose foresight and commitment to this sector of workers has resulted in large organizations of women workers from around 124 different trades, women working in their homes in traditional occupations or as part of a production chain or just providing services in the informal sector (www.sewa.org).


Over the years, the members of SEWA developed an Eleven point Agenda as the framework of their work and struggle. 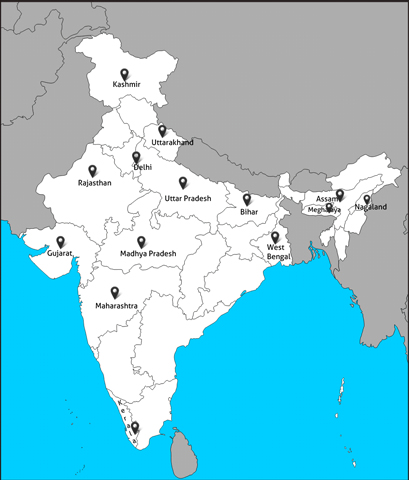 
As of June 2013 there are 17,00,000 members in SEWA. The two prongs of SEWA build up through representative structures from the base to the state and national level. The SEWA National Council is at the leadership of the Union which in 2007 achieved the status of a Central Trade Union. Its head office is in Ahmedabad (www.sewa.org). SEWA Bharat is the national body of the economic and development bodies of the organization. It was created in 1982 to facilitate the formation of new member organizations across the country and to promote their growth and development (www.sewabharat.org). Its head office is in New Delhi. In 2012, SEWA celebrated its golden jubilee.

The SEWA Movement in Kerala emerged in the mid 1980s, through seeking ways to address the crisis of women in traditional sectors who lost their jobs and were searching for new livelihoods. The women who came together were from the fishing, agriculture and reed worker communities who therefore were dependent on natural resources for their livelihoods. Even as they struggled to retain these livelihoods when access to natural resources declined, several of them were also in need of alternate livelihood options. Single mothers in particular needed to be assured of daily earnings so that they could keep their home fires burning. They thus exerted pressure to have some supplementary economic activity.

As there were no other platforms/unions addressing these issues of women workers at the time, Smt. Aleyamma Vijayan and Nalini Nayak, inspired by Elaben, decided to assist these women to create SEWA in Kerala thus linking up to the only larger platform of women workers in the country. The initial years were difficult as this was a new kind of intervention in highly politicized Kerala, but by 1986 the movement began to take root.

Alternate employment generation for workers whose livelihood base was diminishing was the cry of the hour and hence moving into the service sector through the creation of worker’s collectives was the initial challenge.

Even though there was a sense of uncertainty in entering into a new field of work, the initiators were quite confident about the possibility of women being trained to perform as nursing assistants in hospitals or homes. At first the women refused, as they had never worked for wages as they had been self-employed in their own villages. They felt insecure about working with sick people and in other people’s homes, and were skeptical about the treatment they would face as members of socially marginalized communities, especially those who were fisher folk or from Dalit communities. But all these objections were tackled through discussion, which in itself became part of building up the self-confidence of the women. SEWA was the first organization in Kerala to professionalize various kinds of domestic services thereby getting recognition as decent work with decent wages.

This theme was designed by apricot.